A brief summary of

‘Live action Role-Playing, the game, the drama and the experience’

At this moment my book ‘Live action Role-Playing, the game, the drama and the experience’ is only available in Dutch. This book contains 99 insights in the medium Larp and the organisation of Larp events. I wrote it for everyone who is involved in Larp, whether organising, writing or playing Larp events. But I meant it also for game designers who want to use aspects of the Larp medium in their own designs (e.g. escape rooms looking for immersive experiences).

On this page I’ll give you a brief summary of the contents of my book, focusing on the highlights. It will be hard to make an extract of the 400+ pages, which not only contains insights and considerations, but also practical examples you can implement at once. 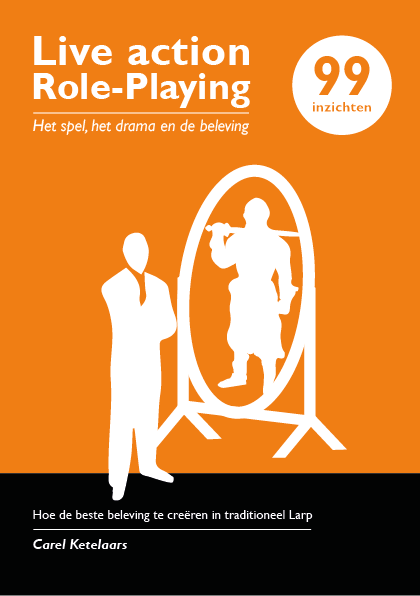 The structure I’m using for categorising my insights has the form of a piramide. 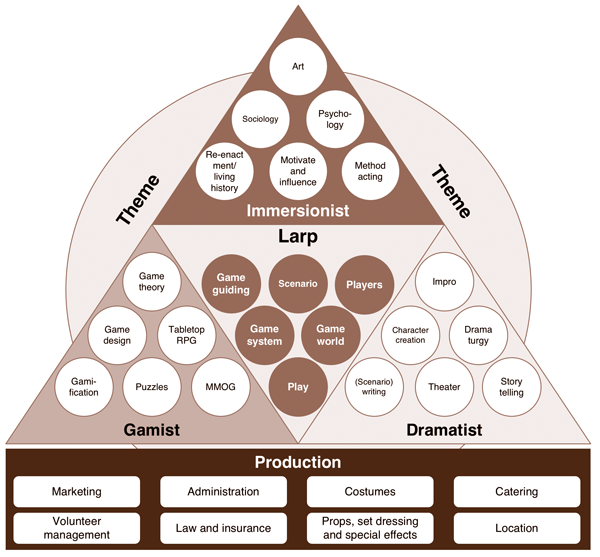 The medium Larp and it’s dimensions are central. At the base the organisational aspects of Larp events are clustered: without this foundation the medium doesn’t come to live. At the background you’ll see the aspects of the theme of the Larp. Because every theme is unique, you’ll find more on wiki pages of the theme, then you will in my book. The medium Larp is surrounded by the three playing styles: the gamist, the dramatist and the immersionist. Players and organisers aren’t often that black-and-white, but for understanding the different way players enjoy Larps it is crucial to distinguish these playing styles. In the styles you see other disciplines that support the medium Larp. Puzzles for instance have always been a part of traditional Larp (opening gates, solving mysteries). Extensive knowledge of puzzles help you to create more interesting Larps.

I would like to share with you main inspirators for my insights. First of all, my own eyes and ears and my own experiences. Next is Floris Koot, my former colleague at DOL Drama on Location, who has taught me early on importent stuff about (impro) play and dramatic scenario’s (1999). The book ‘As Larps Grow Up‘ (2003), the first collective work of the Nordic Larp scene, made a great impression on me when I discovered it just about 5 year ago. When reading Huizinga (1938) and Caillois (1961) I realised for the first time that a lot of what I was considering already has been explained in literature. Last but not least, there is the book Rules of Play, the bible for game designers (and almost impossible to read, but so valuable).

Let’s not forget the organisers, writers, set dressers, players, NPC’s, their actions and their creations. And the discussions I had with them while searching for understanding this bizar phenomenon that was addicting to me and still is.

Behind each insight several arguments, suggestions and stories are hidden. Unfortunately I can’t add them to this page. I can however answer any questions you have or give a verbal presentation taking your specific interests into account. Feel free to contact me. 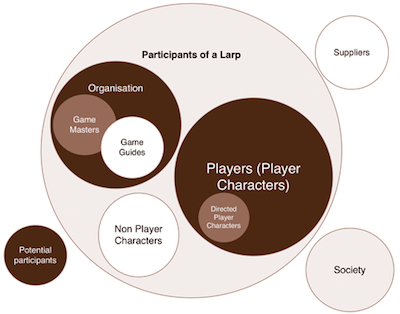 60. Casting of NPC’s for the scenario
61. Play with the characteristics of the surroundings
62. Play made by players take precedence over play from scenario’s
63. The game and play won’t come to you
64. Prevent predictability
65. Reuse scenario’s
66. Points of attention with puzzle plots
67. Touch players emotionally at the intersection of two plot lines

68. Classification of players types
69. The right player for the right game
70. What drives players
71. A player is only a ‘customer’ when paying the right price
72. Conditions for a good designed character
73. Attune (the personalities of) the characters
74. The value of the background story of characters
75. Character ‘Alignment’ (good, neutral, bad) doesn’t exist
76. Immerse in your character
77. Keep in game secrets also secret out of game

78. The role of the game guide
79. Communicate the boundaries of the game
80. Players know less then the game master thinks
81. Solve out of game problems out of the game
82. Organising in game takes a lot more time then out of game
83. Work with negative or positive feedback loops
84. Playing during ‘down time’: preferably not

87. Administration, a job you can learn
88. How to prevent the volatility of Larp
89. Make a review of a game

94. Costumes contribute to a better experience

97. Food and drinks in the theme of the game improve the experience

98. Make the proper arrangements with a location